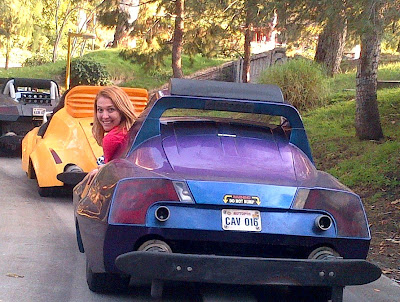 Ahhh the happiest place on earth. I love Disneyland. LOVE it. Some people don't care for Disneyland, think it's cheesy or hectic or crowded. I get that. My love just trumps all of that. Actually, that's not true - my love EMBRACES all of that. I love the cheesiness, the chaos, the excitement of just being in the park.

One of my other great loves? Free stuff. I will take pretty much anything, if it's free. So when a friend of mine who works at the park called to say she could get us in at no charge the following day, I just about fainted. One of my all time favorite places fo' free? SIGN. ME. UP. And park hopper passes, at that! We had only been planning to shell out for Disney, but we got to see CA Adventure as well! Hot diggity dog. 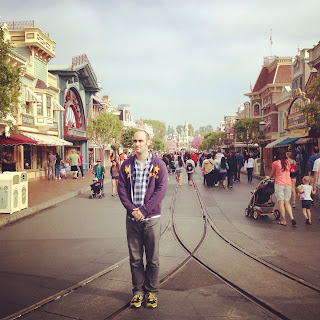 DVC is a champ, not only did he go with me, he was a gamer the entire day. We explored every inch of both parks (save for the canoes, BARF, it's not a ride if you have to propel yourself), but I'm getting ahead of myself...


"Embark on a bold expedition into excitement and intrigue!" 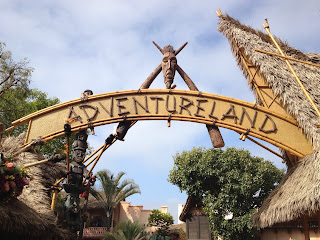 Swung immediately left into Adventureland (all you "right turn enthusiasts" may kindly exit the blog now) and walked immediately onto Indiana Jones. BOOM. This day is getting off to a great start. DVC manages to spot two hidden mickey's on the way to New Orleans Square (sorry, Dad), where we walk immediately onto Pirates. BOOM. Half an hour later we are walking right onto Splash Mountain. BOOOOM. We are SO good at Disneyland.


﻿﻿﻿﻿﻿﻿
﻿
One of my favorite spots in the park when I was a kid was the Country Bear Jamboree, which is no longer there now that Winnie the Psychedelic Shroom-trip Pooh Bear took over the neighborhood. *tear*  We ran into the old gang at the petting zoo (where naturally I was forcing Dave to admire the cow with the Mickey on it's flank) and CAN YOU BELIEVE IT nobody was even trying to get pictures with these dudes?! What is wrong with people these days.

﻿
By noon we'd made it halfway around the park, so we cut back through the castle and headed for the BEST EVER corndog cart in the world: the Little Red Wagon, right at the end of Mainstreet, tucked into a corner behind the Carnation Cafe (where cousin KK introduced me to the bomb cobb salads what what!).

Then I realized that was RIDICULOUS. Ain't no shame in corn dog lovin'.

What to do after corn dogs?? Teacups of course!!

Stood in line for Mr. Toad (weird that this was the only one we waited for all day?) and DVC got some of his road rage out. Waved at Pluto ambling by, caught a glimpse of the Evil Queen peeking out the window high above, tried to convince DVC he NEEDED an embroidered Peter Pan hat, then crossed over to California Adventure to wander for a bit. Hit all the major spots, highlights include: stumbling upon a Newsies parade (!), cream cheese jalapeño stuffed pretzels, a Hollywood Blvd much prettier than the real thing, coaster seats behind a tiny little boy and his ancient grandpa who both laughed hysterically the entire ride. Then back to Disney for another go 'round during the parade (crowd control, suckas!). It was an exhausting, wonderful day, and my cheeks hurt from grinning as we padded slowly toward the parking lot (Goofy 8H!, remembered with the help of obscenities, ala Leigh Stephenson).