How do you ask a Tyrannosaur out to lunch? 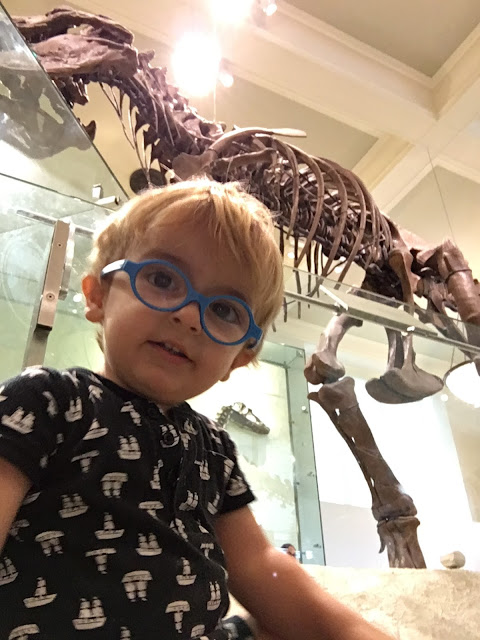 
Haaaaa! Sorry, got that out of my system... 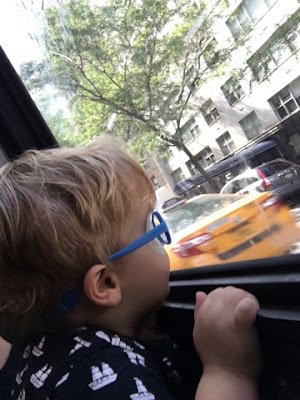 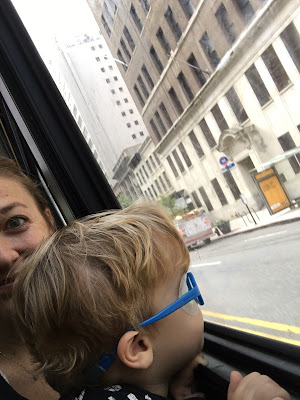 Starting with the bus ride across town. Nobody loves a good bus right more than this dude.

We hopped on the bus early, planning to arrive as close to the museum's opening time (10am) as possible and were actually stepping off the bus just a few minutes after ten. Booyah! (On time with a toddler pretty much means you're light years early.) But as we approached we could see there was already a MASSIVE line cascading down the main front steps and winding down the street. Bummer. For all those dorks, at least. WE headed for the planetarium entrance around the corner - trick of the trade for anyone planning a visit to NYC, always enter at the secret side entrance because hoards of people congregate at the Teddy Roosevelt statue out front and a crowd is often formed well before the museum even opens. Suckers! Little do they know, the exact same ticket booth / entrance process lies right around the corner at the planetarium entrance and nobody ever goes there! Boom, we were inside in 5 minutes. Spent a good chunk of time in the Scales of the Universe hall testing our weight on the moon (G weighs 4 lbs!) and all of the planets. Amazingly there's nothing in the entire hall that's breakable, so Graham could touch all of the different exhibits. He kept looking at me questioningly as he was touching different things, wondering if he was going to get in trouble. Not too many clear pics of him because he was speeding around like the planet formerly known as Pluto (or is that Pluto formerly known as a planet?). 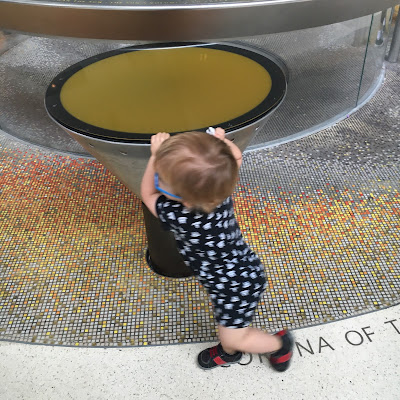 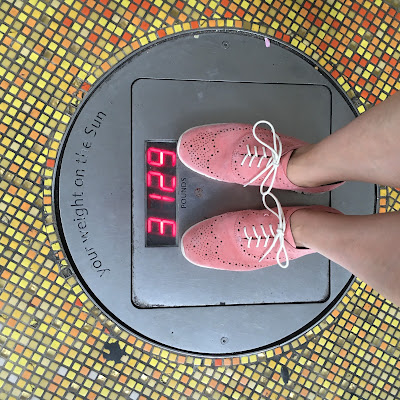 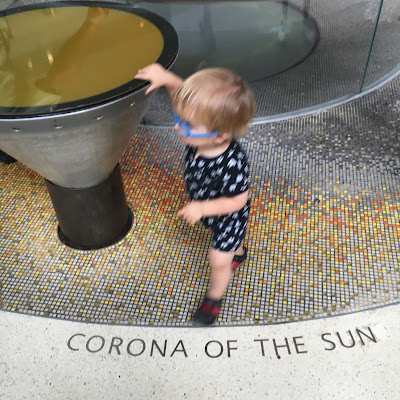 We made our way through the Hall of Biodiversity rain-forest, which is dimly lit and totally spooky,
and ventured into the whale room (easily my favorite). 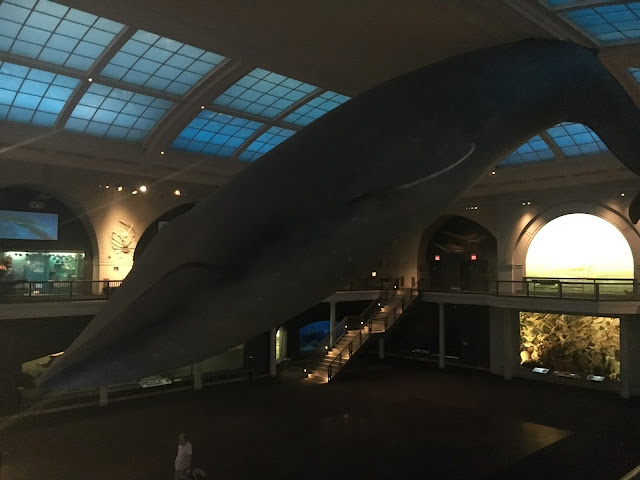 Terrible photo, I know, but part of what makes this room awesome (aside from the giant blue whale suspended from the ceiling!) is that it's almost completely dark and there are random ocean animal sounds being piped in and really calming wave-like patterns playing across the blue skylights to enhance the feeling that you might actually be deep under the sea. It was still really early when we arrived and the crowds hadn't made their way to this room just yet (everybody heads straight for the dinos and African elephants right near the main entrance, amateurs), so Graham had free reign of the room. Since there really wasn't anyone there to bother, I let him run around like a maniac. 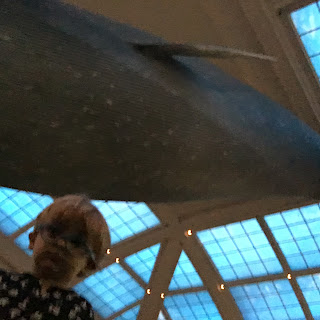 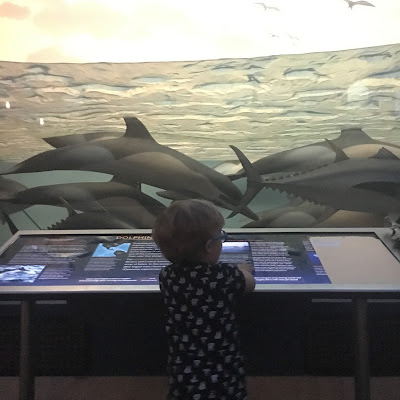 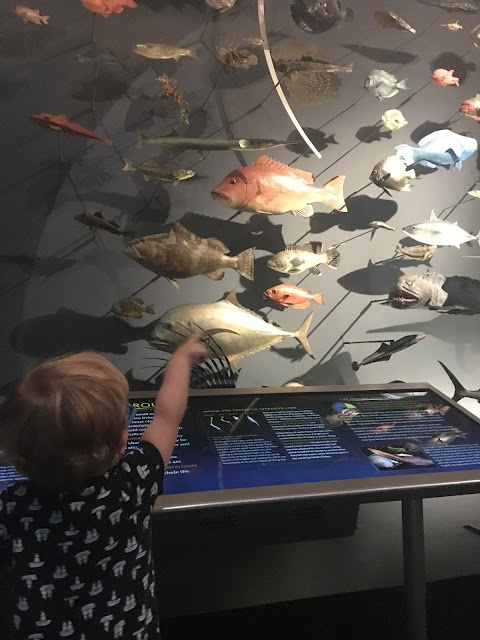 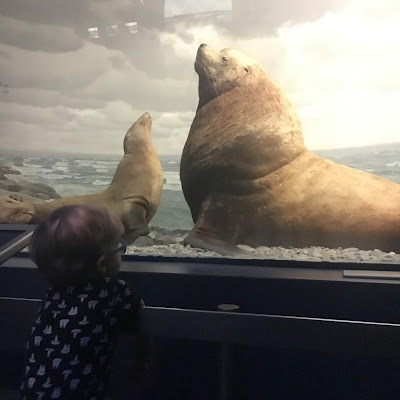 Funnily enough, his favorite display was the sea elephants, he kept circling back to it. Looks like it's time to plan a visit up to San Simeon for the real thing, Jamma! Spent a little time with the land elephants, as well, enjoying a snack in their company. There was a great monkey display right across from our snack bench, which G waved and hollered "mono!" at repeatedly. He's bilingual, you know. Baby genius. 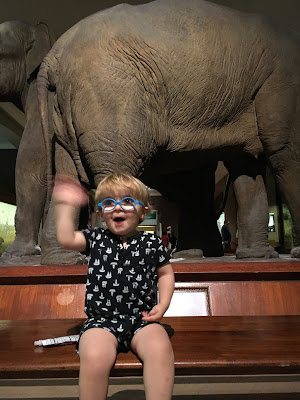 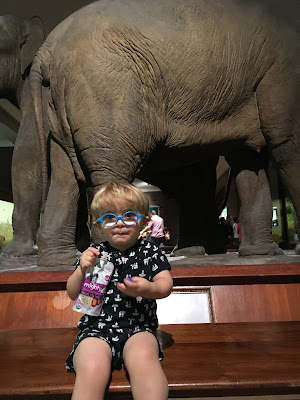 And then it was time for the dinosaurs. I wasn't sure if he'd get it, or if he's too young yet to equate the giant fossil forms with the tiny white plastic t-rex he'd been clutching tightly since we left home. Whether he understood what they were or not though, he was fascinated and kept saying "wooooow" very softly. 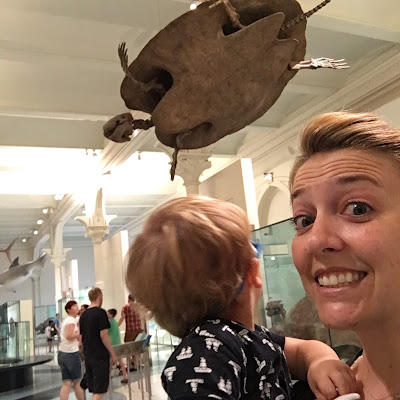 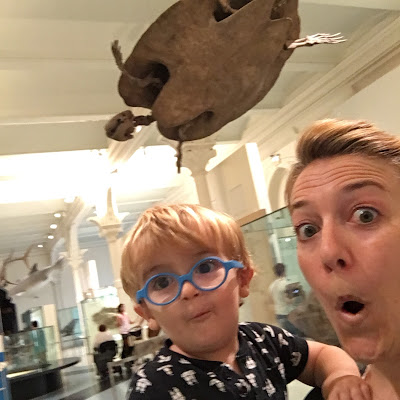 Seriously, though, can't beat the bus ride. Worth every penny. 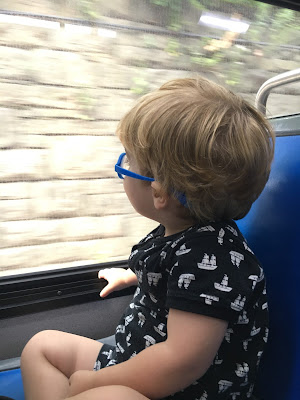 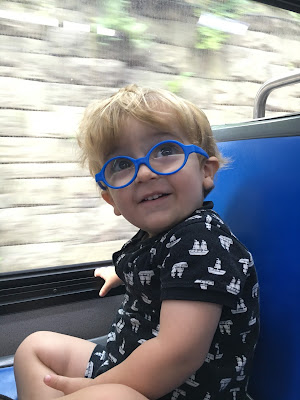 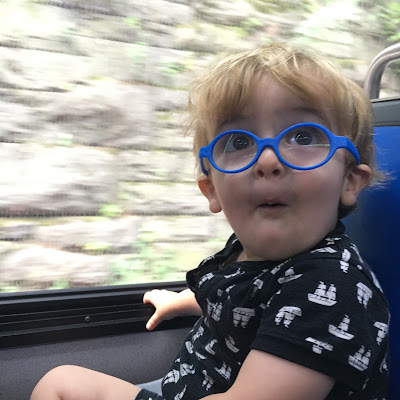 Does it get any better than this face??