We discovered a lovely little hole-in-the-wall Italian place Friday night for dinner (I love it when that happens) and then began making our way south through Chinatown to meet up with some friends-of-friends who were supposedly at an amazing bar we just had to see.  It was erie walking through such an industrial, normally bustling area in the dead of night. Shops locked, windows boarded up, super quiet streets with no people walking around. Weird.

In the middle of one particularly quiet block, we stumbled upon a delivery truck parked on the side of the road. It was covered in graffiti and seemed to be emitting music. Curious. The flashers were on, but the engine was off and the cab was empty. Curiouser still.

As we got closer, we were able to see that the back of the truck was wide open, revealing a beautifully lit garden scene with an actual flowing waterfall and rock pool, lush greenery and gorgeous flowers.  It was so pretty, but SO out of place that it made me nervous. Were we being punked? About to be abducted?? 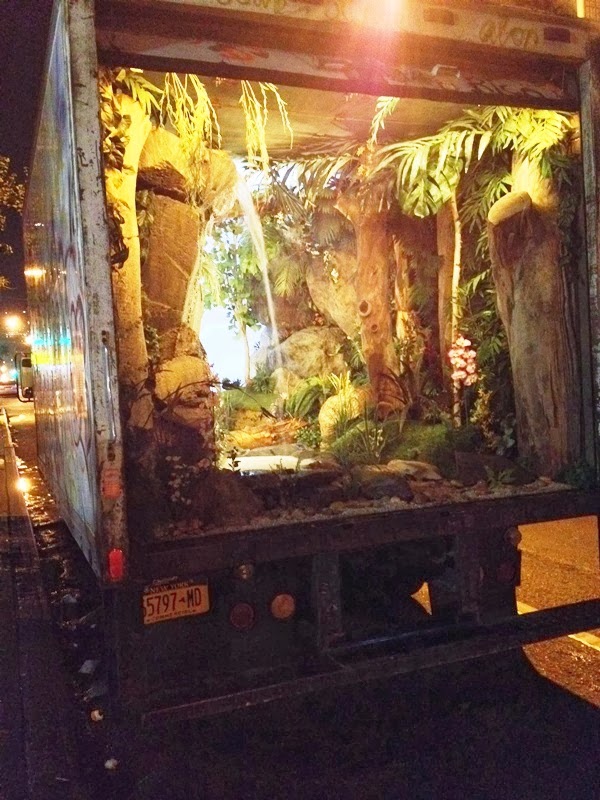 We peered inside and snapped some pictures, then continued on our merry little way without thinking any further of the odd little jungle truck. The next day I told a friend about my weird experience and showed her the pictures.  It wasn't until the following evening, when she texted me to say OH MY GOSH, DO YOU KNOW WHO YOU SAW??, that I realized just how significant of a sighting we'd had. The truck was apparently a Banksy piece - part of a highly-anticipated month-long NYC residency, where one new piece of art is revealed somewhere in the city each day.  ("Who the hell is Banksy?" Calm down, Dad, you know I always explain these things for you - Banksy is an elusive British street artist best known for graffiti stencil work and having managed to keep his identity a secret from the public.)  Artwork locations are revealed online and on instagram, with thousands of fans immediately flocking to the sites once details are released. We were lucky enough to stumble upon the truck apparently before it had even been announced and any of the crowds arrived.

Thank you, New York, for providing yet another even-cooler-than-I-realized-at-the-time experience.

Follow the residency here: Better Out Than In
Posted by megidew at 12:00 PM