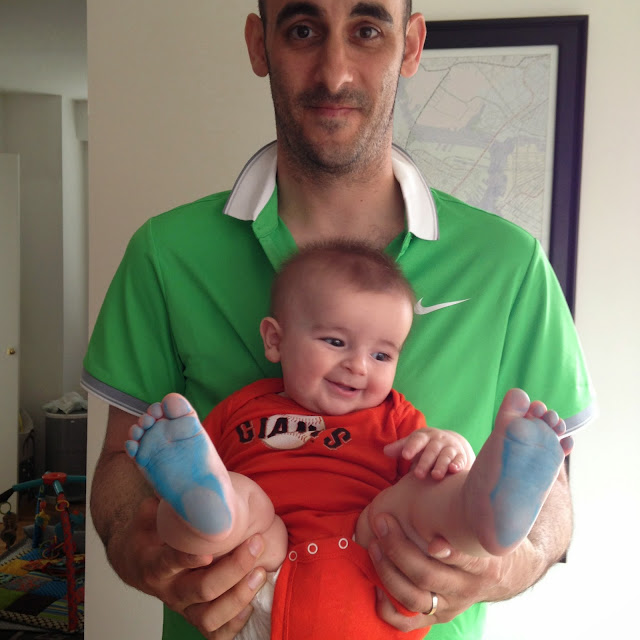 Kind of seems like a boring milestone after celebrating six months yesterday (thus the art project - footprints for the babybook!). But we didn't provide much of an activity update, so here is some info on the latest and greatest Graham developments... 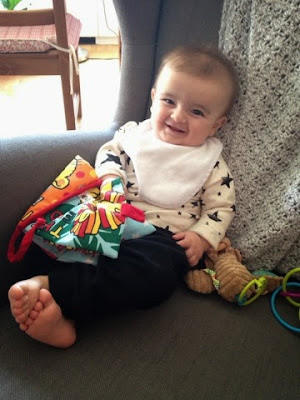 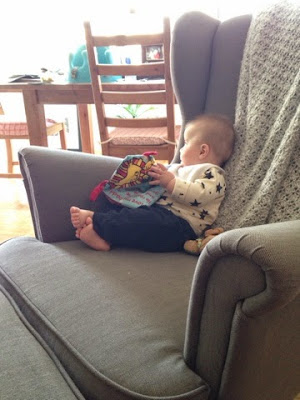 A few people have asked if we pose him with his ankles crossed. We do not! He's a dapper little gentleman all on his own. We often plop him down on the big gray chair because the angle of the seat makes it unlikely he'll topple off and he usually crosses those chubby little ankles right away, completely unprodded. So dandy. 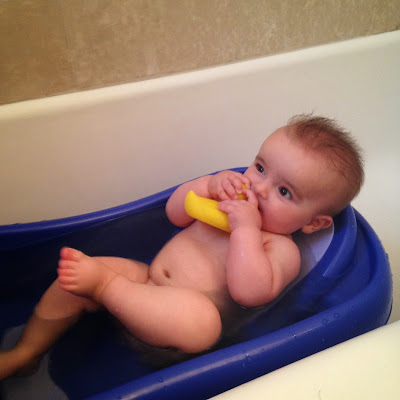 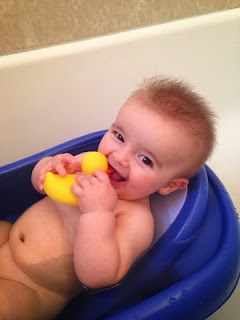 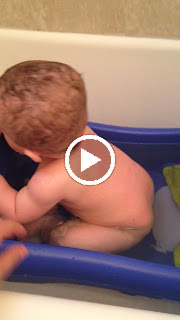 Bath time gets more fun and interactive each day, as G learns to splash and moves more adeptly in his tub. However, this also means that mom/bathmat/all bathroom surfaces are completely soaked after each tub sesh. 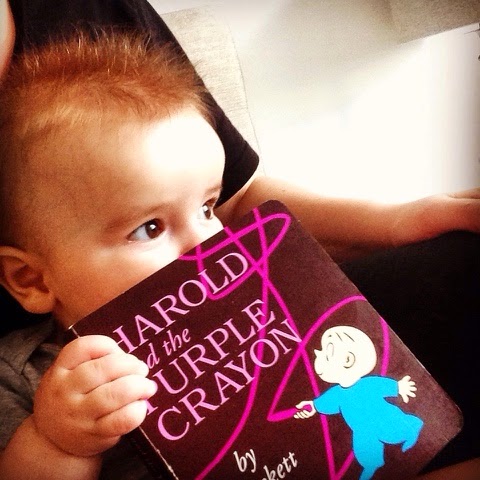 Graham loves looking at picture books, but lately he's only been interested in gnawing the edges of them, so we try to limit our reading to those with sturdy cardboard pages. Harold is currently in top rotation. I think he may think it's a biography - about himself. Sorry kiddo, no over-sized crayons in this house. 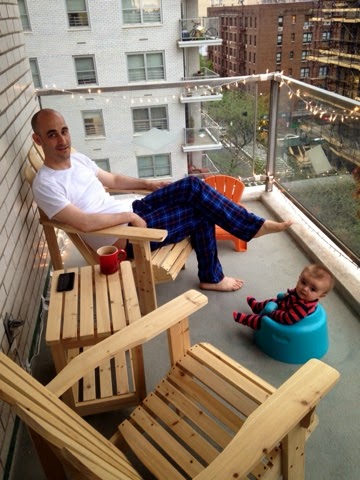 Now that it's warmed up, our patio is getting SO MUCH USE!! Guess that's more of a family update than a kid update, but Graham loves it out there. If he's cranky and we can't seem to figure out what's bothering him, a little fresh air in the bumbo seat always seems to do the trick. 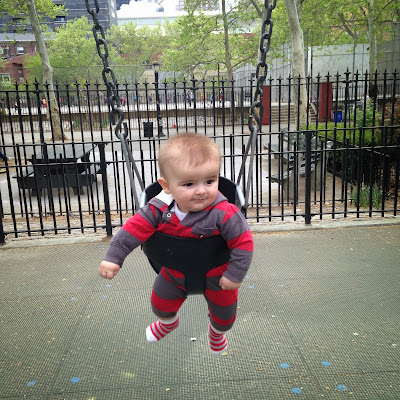 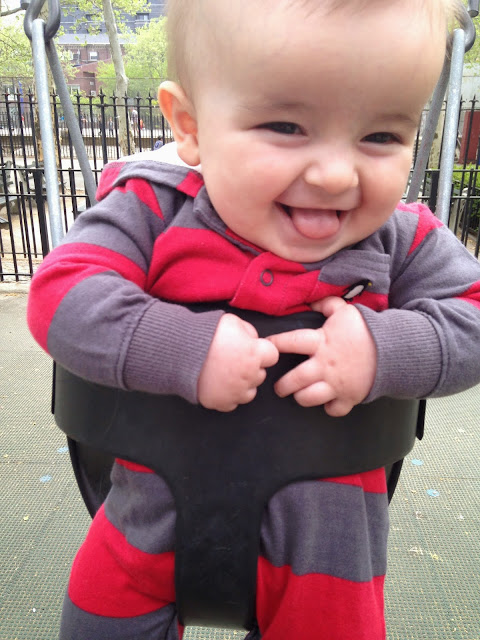 That, or a quick trip down to the park on the corner for the SWINGS! Graham started swingin' this weekend and boy was he stoked. He giggles the entire time. Which means we also giggle the entire time. Yup, we're that family.  "Hey there's those crazy laughing people!" "Keep walking, Bobby, don't make eye contact." 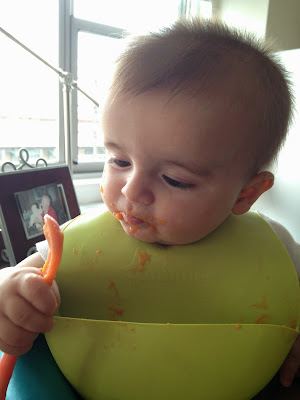 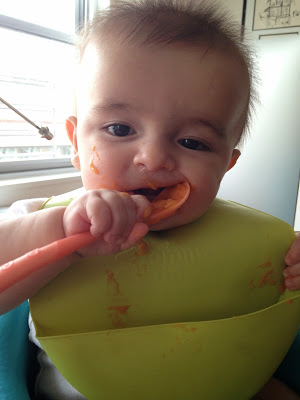 I've been letting G feed himself as much as possible during meals and he loves it. Certainly not much makes it down the hatch, but he holds the spoon and brings it (mostly) successfully to his mouth and happily slurps away. Tried avocados for the first time this week and he wasn't a huge fan (that's my boy!). On the menu this week: peaches and squash (NOT a whole roast chicken, as Dave was hoping for). 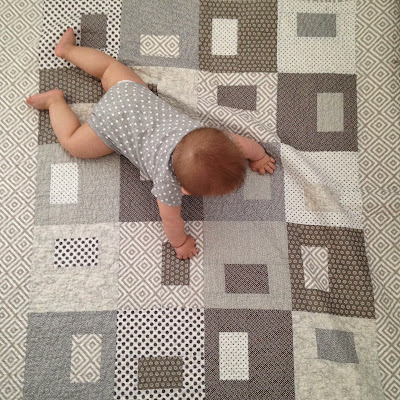 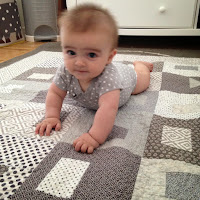 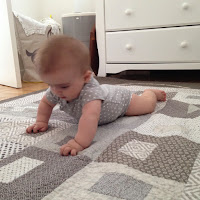 Making moves like he's thinking about crawling. Certainly can't actually make the movement yet, but learning to push with his legs, get his bum up in the air and rock his weight around. He'll shimmy himself all over the blanket and sometimes scoot himself right off of it! 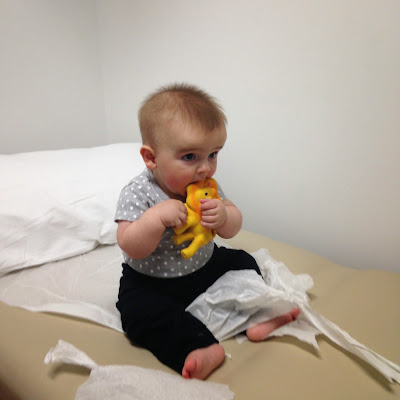 Went to the cranium doc last Thursday and confirmed that G's headshape is A-OK! No need for a corrective helmet, all his lumps and bumps are typical of a baby head and his brain seems to be growing just fine. On a side note, Graham was a HAM at the appointment, giggling and cooing at all the doctors and interns, full on cheesing it up. I'm sure he says it to everyone, but the head doc came in looking like a major grump and then five minutes later told us, "I get to take home one baby per day and this is him!" We chose to see this as sweet and not creepy. (Back off, baby stealer!) Don't worry, Graham made it home safely, big head and all. We go to the regular doctor on Tuesday for his six month checkup, so will have some new growth stats for you later this week!