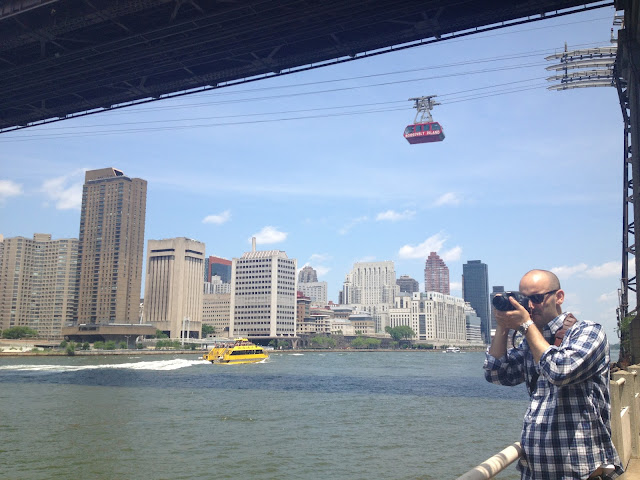 Decided to head out to Roosevelt Island, a long narrow island in the East River between Manhattan and Queens, for some sightseeing over the weekend. Formerly known as Blackwell's Island and Welfare Island, then finally dubbed Roosevelt Island in 1973, this 2-mile strip of land has been home to many hospitals, a penitentiary, workhouse, lighthouse and, perhaps most famously, the New York City Lunatic Assylum. From Manhattan, the island is accessible via subway or tram, while there is a bridge to/from Queens. We opted for traveling via air rather than undersea (though I kind of want to be able to say I've personally experienced this fun fact = the R.I. subway stop is the deepest one in the city!). The trams depart every few minutes, so it's quite quick to get there. 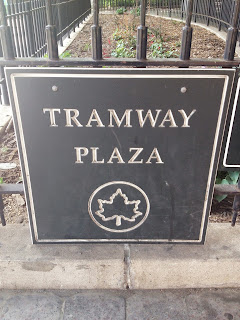 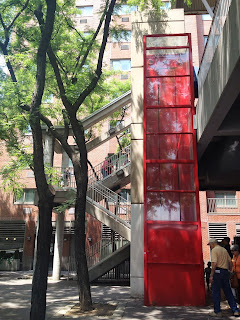 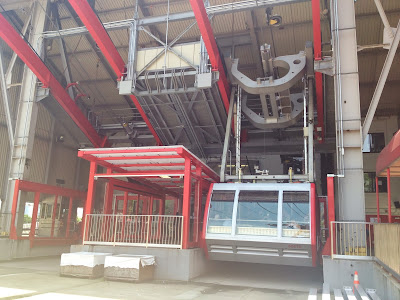 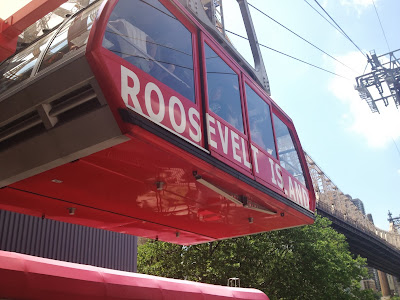 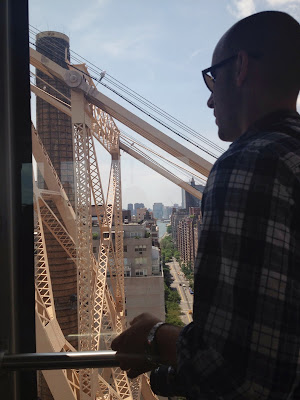 The fee to take the tram is covered by a regular metro card, so it was free for us, woot woot! It's about a three-minute trip across the water, gorgeous views the entire way. First you are exposed to a new perspective of Manhattan as the tram gains height and emerges out of the highrises, followed by a bird's eye view of boats on the water below as you traverse the river, then an ever-nearing close up of the long and skinny Roosevelt Island as the tram makes it's descent.  The tram reminded me of the many mountain gondolas in Germany. Germans love their mountains and they loooove their gondola rides. 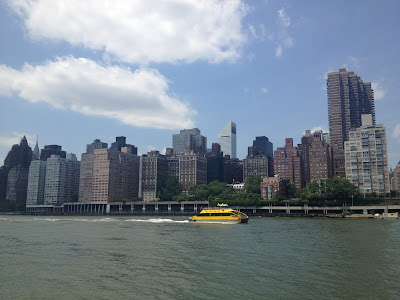 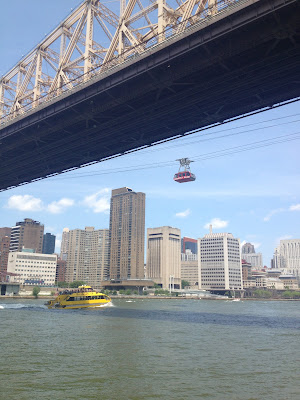 Roosevelt Island has just recently begun increasing in popularity as a residential area. Historically, it's been home to a number of different hospitals and thus has a bit of a stigma as a place for the sick.  Seems like it'd be a fantastic place for recovery, as it's extremely quiet and very flat and has a billion benches overlooking the water. Unfortunately, there isn't much to do other than walk around (full lap of the island takes less than an hour) or sit still and observe the bustle of Manhattan from afar. It's easy to get around, as there are constantly running red busses to take you anywhere you like for just 25 cents. Mostly people just walk - at it's widest point, the island is only 800 feet wide. 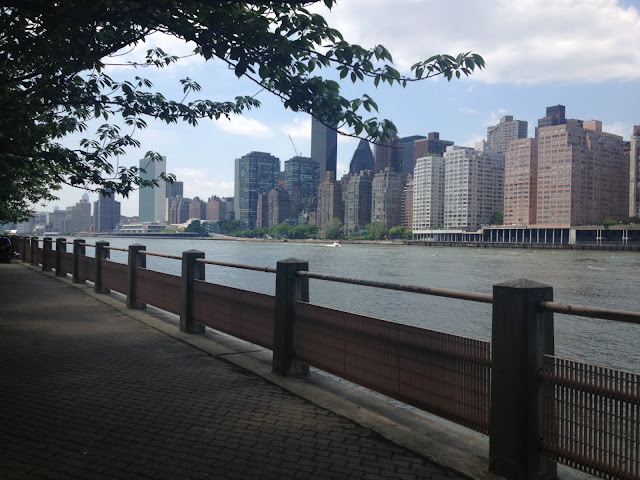 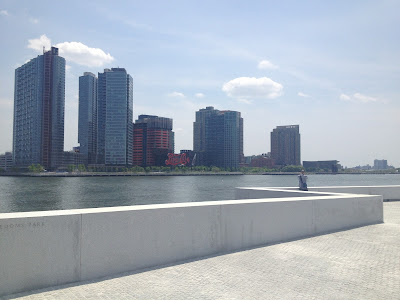 Looking east toward Queens at the famed Pepsi-Cola sign. 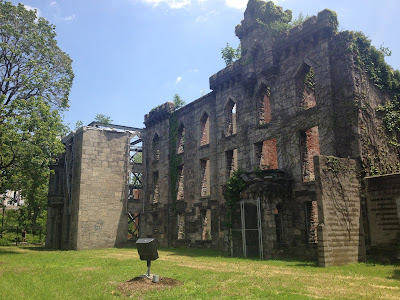 Toward the southern end of Roosevelt Island are the remains of the Renwick Smallpox Hospital, in all it's super creepy glory. Many visitors think that this site is the former Lunatic Assylum, another dark spot from Roosevelt Island's turbulent history (at one point, the Assylum held 1,700 inmates, which was twice the capacity it was designed for). The buildings were abandoned in 1956, so not particularly long ago, but still they look incredibly weathered and worn, with plant life growing in and among the facade (receiving plenty of water and sunlight since the roof is long gone). The withering structure has recently undergone extensive stabilization fixes, with all new support constructed from the inside so it's invisible to visitors.  They light the remains up at night, but I think I'd be terrified to visit after dark. 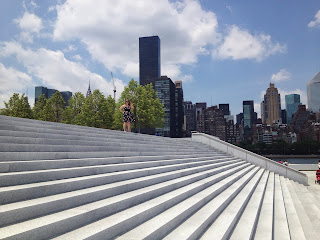 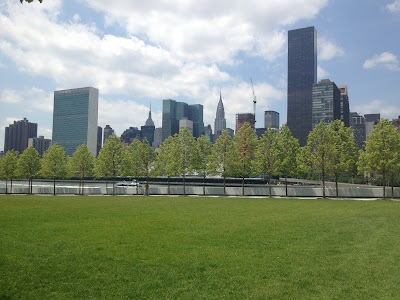 Franklin D. Roosevelt Four Freedoms Park, a brand new state park which opened just last year, lies at the southernmost tip of the island. Freshly planted trees line a beautifully manicured lawn and form an oversized V shape that points toward a giant bust of Roosevelt himself. Beyond that is a set of modern concrete steps where one can sit and watch the water crashing over the rocks. It's a really neat park with great views in all directions. Several families and couples were picnicing and I was tempted to plop right down with them. DVC just wanted to hang with FDR. 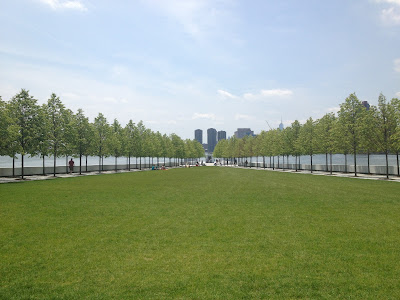 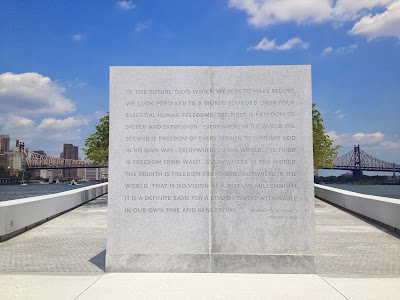 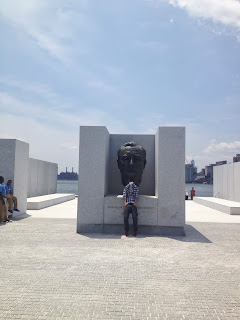