Apologies on how long it's taken me to get photos up from our Thanksgiving adventure, but finally on it!
It was my first visit to DVC's hometown and my first trip to northern central New York (everything outside of Manhattan seems like "northern" to me) and my first snow storm of the season.  A lot to process all at once! 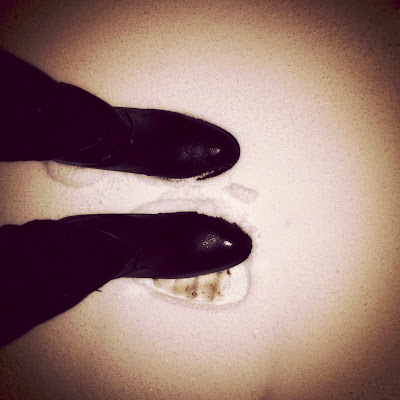 Since we had Sophie and Penny in tow and pups aren't allowed on the train, we decided to rent a car and drive ourselves up there. First adventure - getting the car. Obtaining a rental vehicle in this city is no small feat. It took a subway ride out to Queens, catching a bus to La Guardia Airport, then hopping on a shuttle over to the rental car area...whew!  DVC had made the reservation, so we had a nice big  mom car  SUV.  Crazy weather reports had begun circulating several days earlier, with expectations of a giant snow storm breaking on Wednesday evening - right during our planned travel time. The storm watch made everyone more than a little nervous (we received multiple concerned parental calls in the days leading up to our trek), but the only alternative plan was to try driving the next day and the storm was expected to worsen over the course of the week.  So we decided to forge on, and I nerdily made a survival kit of food/water/blankets in case we got stranded by the side of the road in the middle of a storm ("just like Friends!" according to my sister).  Of course, when you're prepared, nothing that exciting ever happens. 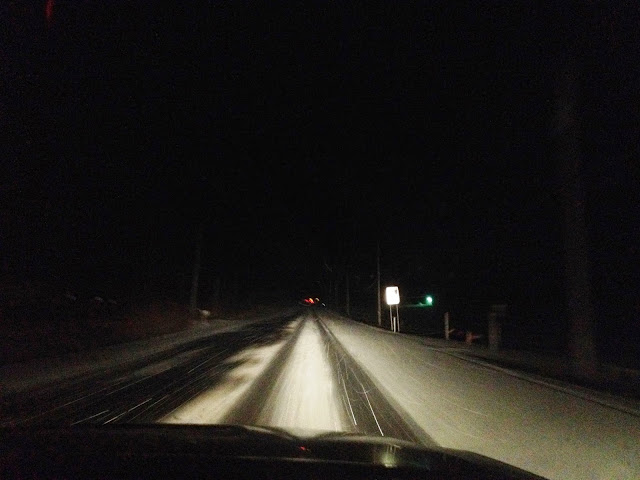 I took the first shift of the drive. When we left Manhattan on the day before Thanksgiving, it was in the midst of a torrential downpour. Traffic was crazy leaving the city (took us a full hour just to get out!) and super scary due to the rain, but both the weather and crowd calmed significantly once we hit New Jersey. It drizzled on us for about an hour and then stopped completely for a few. DVC took over the wheel about 2/3 of the way there, right when we began to see some snow along the highway. I was grateful he drove the last leg, because the last hour was super windy with pretty heavy snow and it was a bit scary to be on the freeway. Finally hit our destination around 11pm and were greeted by an abundance of snacks and hugs. 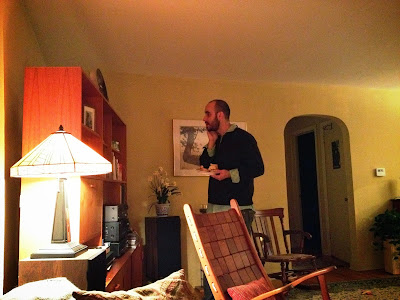 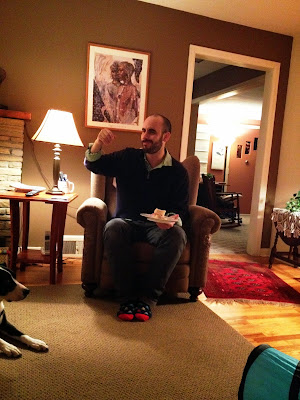 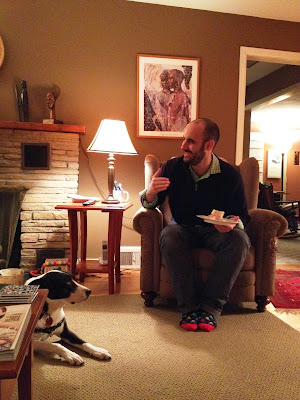 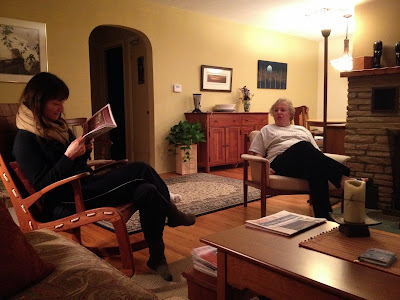 Stayed up eating/chatting/relaxing/laughing for several hours at Laurie's house, where DVC spent most of his adolescence, then popped across town to Dave's dad's house to drop off Soph and Pen (Laurie's cat rules the roost, so puppies ain't allowed to stay the night!).

More driving in the snow! More snacks and hugs and old photos and reminiscing! 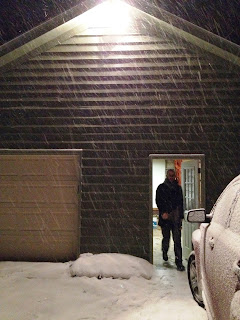 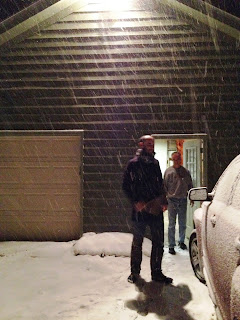 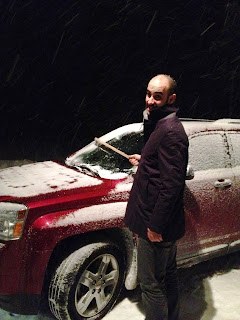 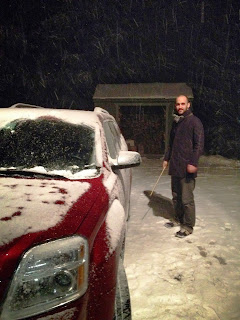 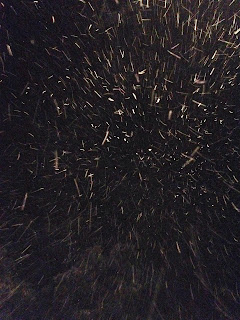 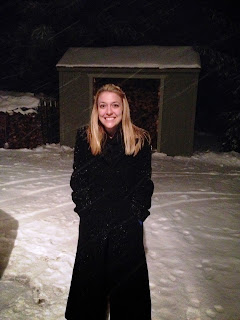 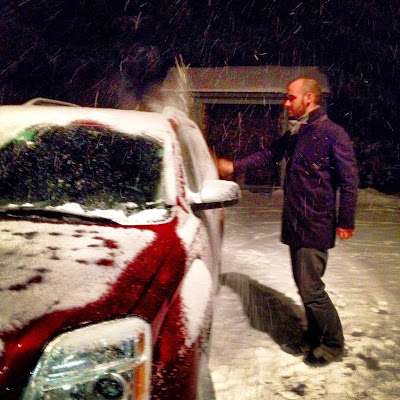 Who knows what time it was when we finally hit the sack, but look what we woke up to!!
A perfect winter wonderland, just in time for Thanksgiving... 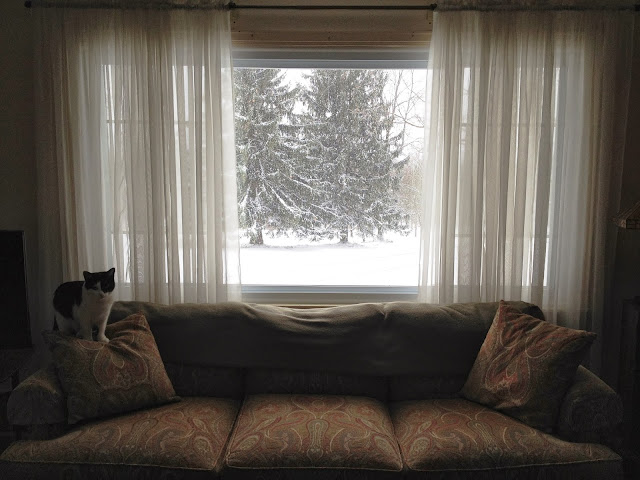 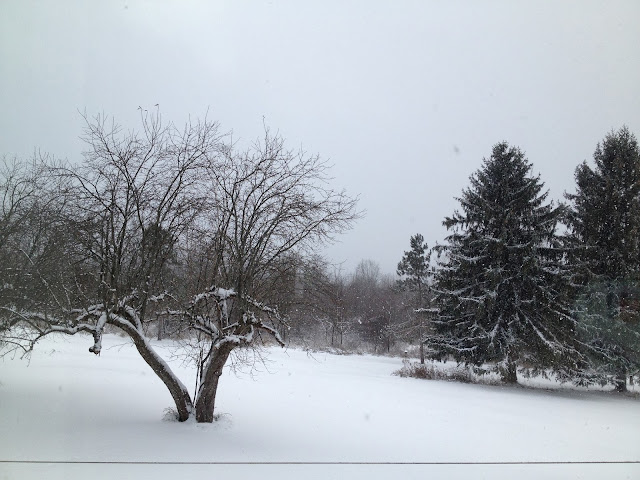 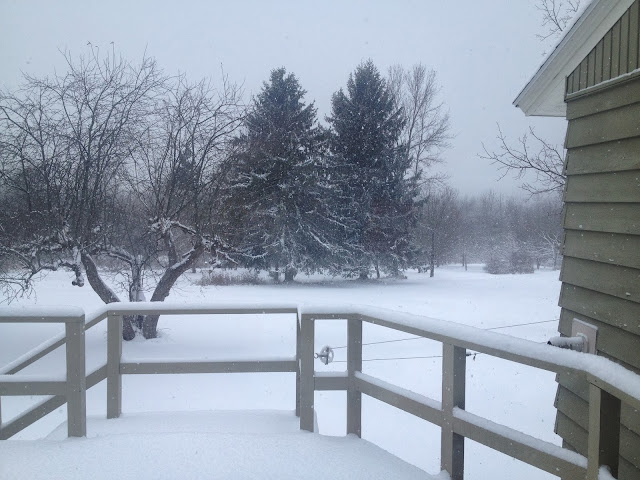