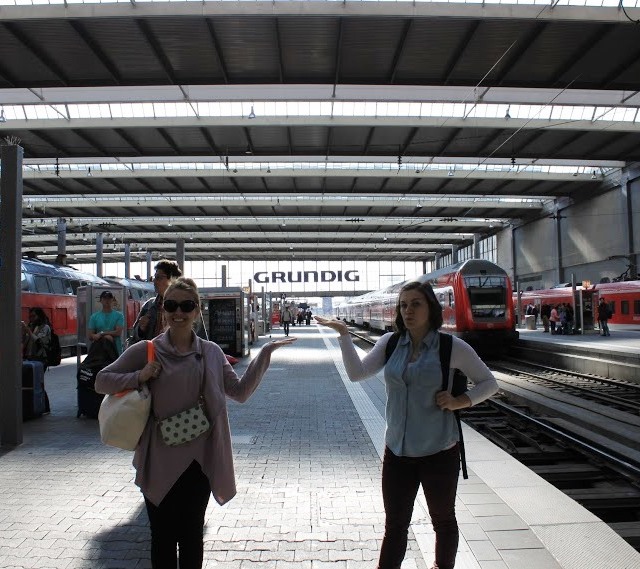 After 4 days in Italy, it was time to head back to the motherland.  As soon as we touched down in Munich, we dumped off our stuff at Leigh's flat and shook a tail feather for the train station - gotta catch the BOB to Tölz!  Though it's only about a 50 minute ride, we made sure to stock up on Butterbreze, Spezi and Schokolade for the road.  I'd been really excited to show DVC around my German hometown (this is where I did an exchange during college and later lived for several years as an au pair), so I was giddy the entire train ride.  It's a gorgeous jaunt through the Bavarian countryside, the Alps looming ever larger as you travel further south. 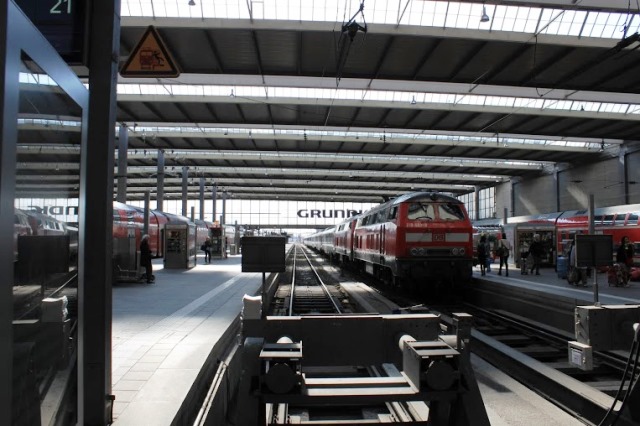 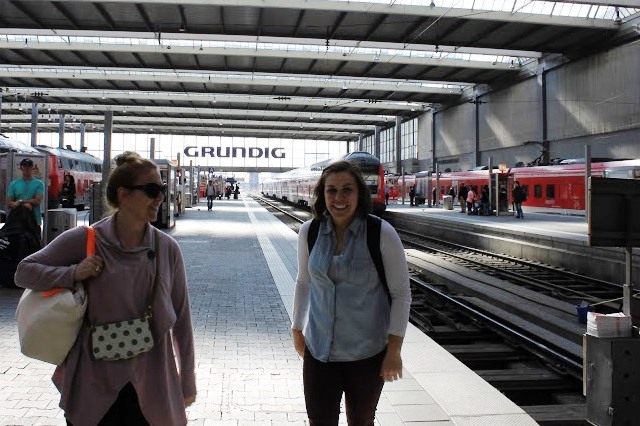 Daniel's dad (Johannes) met us at the train station, which was nice since it was starting to drizzle as we exited the train.  We arrived just in time for dinner, quite luckily, because Daniel's mom (Lena) is a wonderful cook.  After getting settled and receiving a brief tour of the house, we sat down to an amazing meal.  Lena served homemade schnitzel and delicious potato salad, so I was in seventh heaven.  DVC and Johannes got along immediately, despite (or perhaps enhanced by) a bit of a humorous language barrier.


They got along so well, in fact, that Johannes later insisted Dave try on his lederhosen... 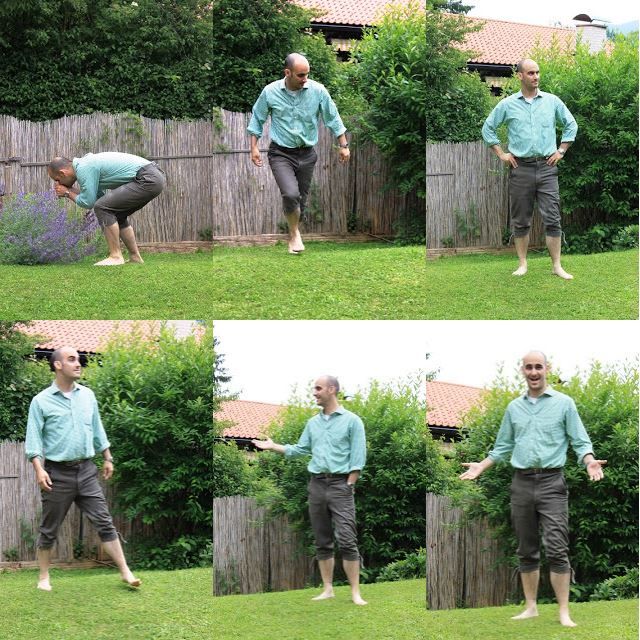 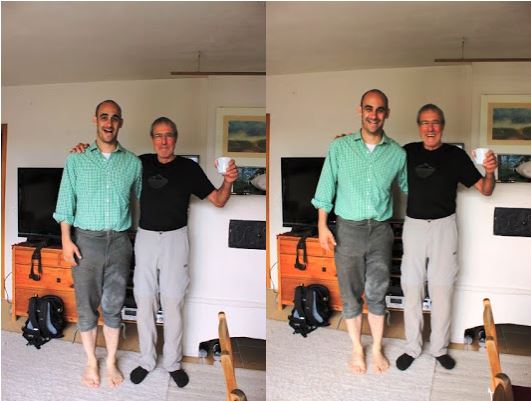 It was hilarious watching these two together.  They were constantly cracking each other up, though I think half the time they weren't exactly sure what the other was trying to say.  Even if the right words weren't there, the laughter was perfectly clear.  At one point, Johannes offered to send the lederhosen home with Dave... as long as he sent back a compound bow in return.  Even trade, no big deal.  Nevermind the potential customs issues... or arms-trafficking charges. 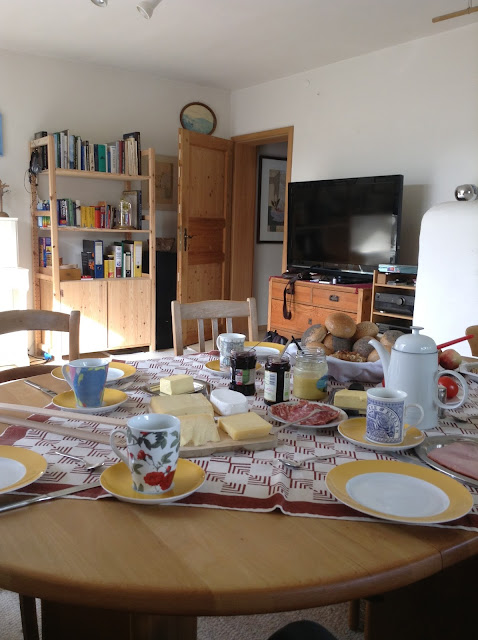 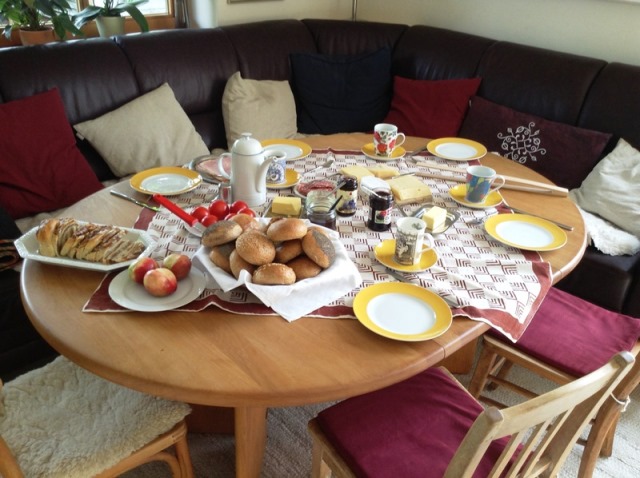 After indulging in an epic Brotzeit for breakfast the next morning (the Bodes do not screw around when it comes to food), we headed out into my beloved Tölz to hit up all the Stephenson's favorite spots... 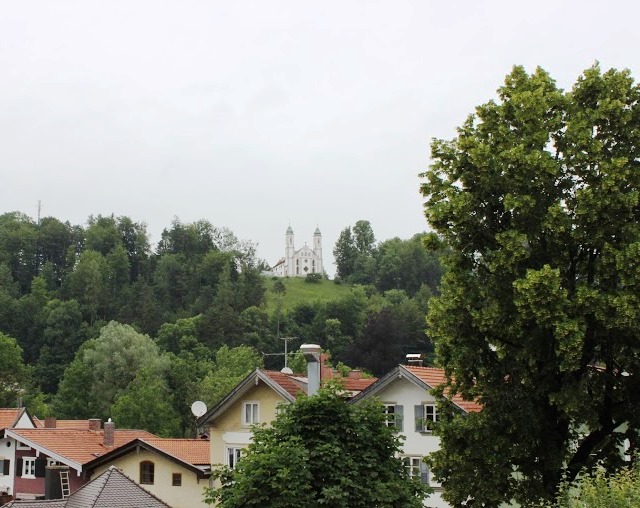 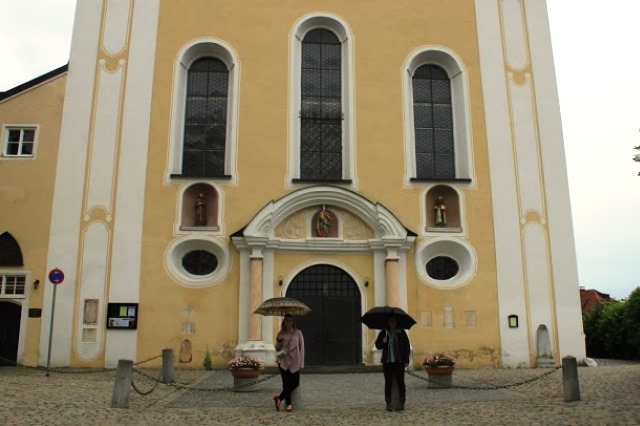 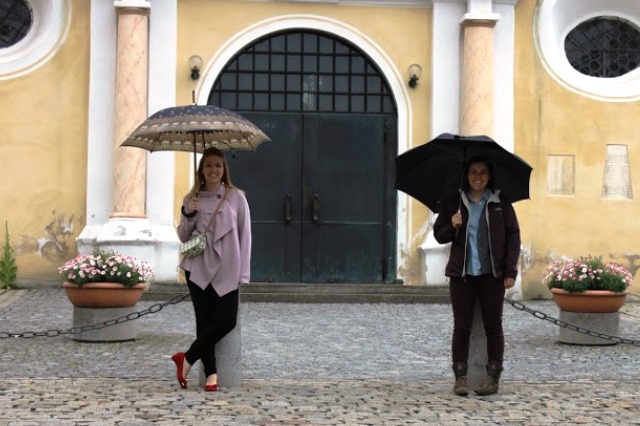 Started with a walk around to the Franziskaner Kirche, where we had a lovely view of the Kralvariankirche across the way (the white church on top of the hill in the center of Tolz is more famous, but I think this yellow church behind us is much prettier to visit).  Behind the Franziskaner is a large set of gardens where they hold a number of different festivals each year.  The first time my dad ever came to visit me in BT, the Tolzer Rose Festival was going on and we spent hours and hours looking at the different varieties of roses. 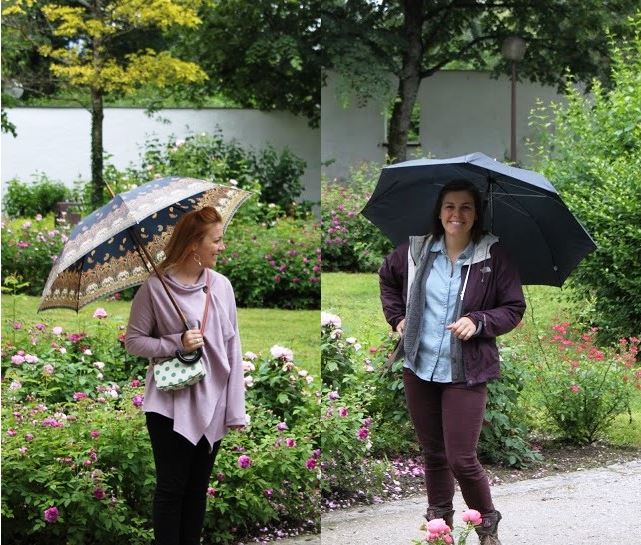 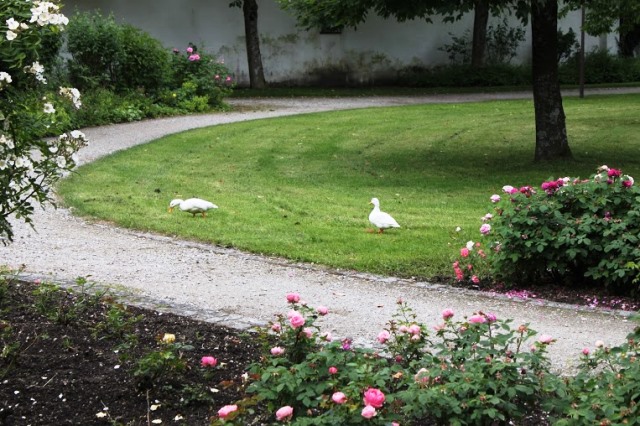 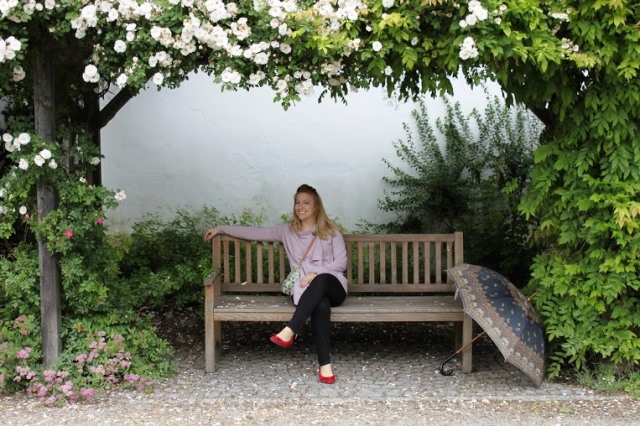 We then crossed over the River Isar to the Markstrasse, the bustling center of this quintessential Bavarian town. The pedestrian-zoned street is so adorable it looks like a movie set.  The buildings in this area are all painted with intricate frescoes called Lüftmalerei, so beautiful you instantly feel transported in time. 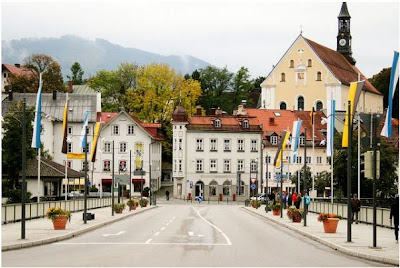 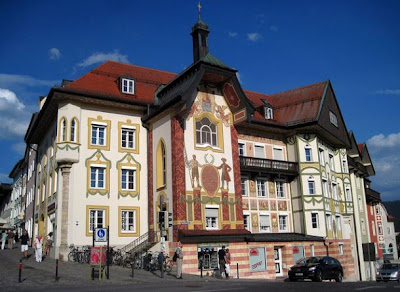 First stop, as always, the hat shop - so Leigh could watch me prance about singing Ascot Opening Race.

Second stop, Cafe Gotz, for coffee, krapfen and nostalgia - this is the small coffee shop I used to come to several times a week to use the computers and write to everyone back home when I didn't have internet of my own.  It was fun to see that not much has changed - though they've added an additional computer! 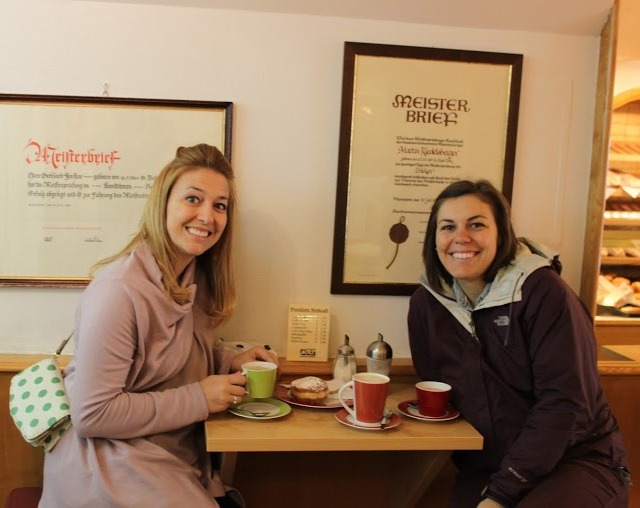 We passed by a traditional dress shop with adorable traditional outfits in the window that made me go awwww.  Right as I was admiring them a guy walked by, hearding my oohing and ahhing and laughed; apparently "how cuuuuuute!" sounds the same no matter what the language. 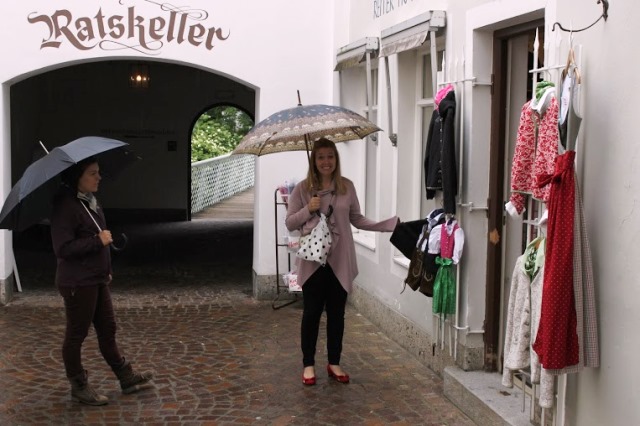 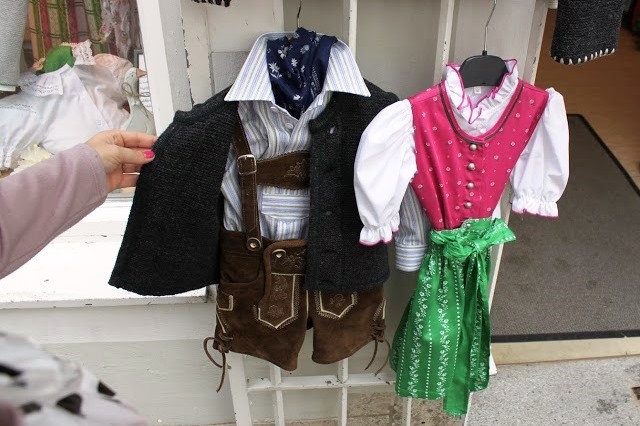 Last but not least,
no trip to Bad Tolz would be complete without a visit to my favorite beer spot - the Ratskeller. 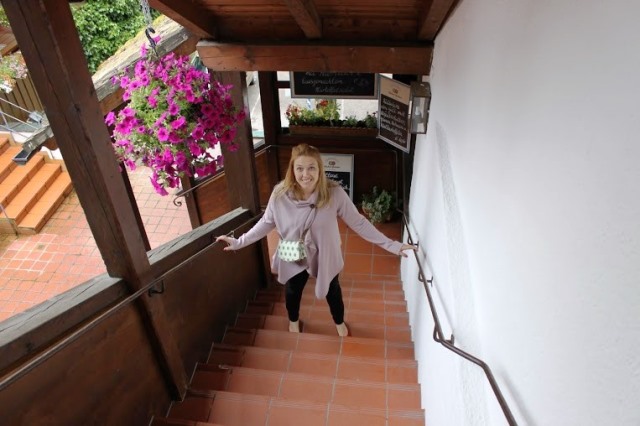 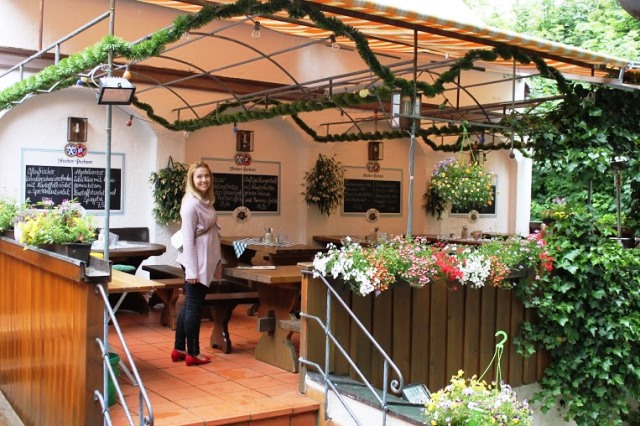 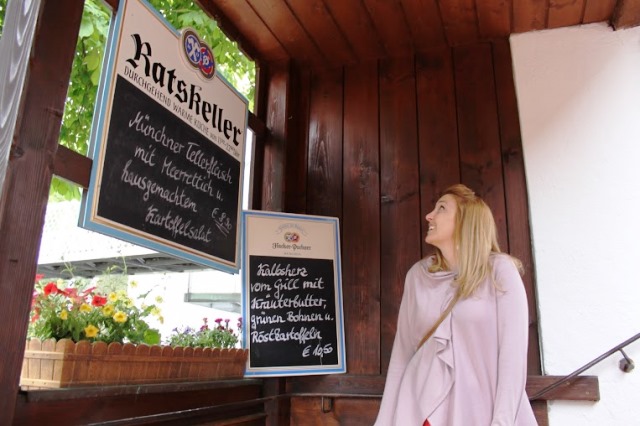 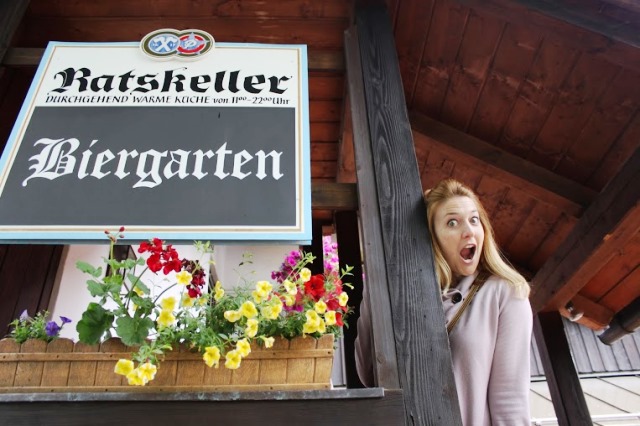 Now, off to lunch with the Glas Familie!
Posted by megidew at 8:28 PM